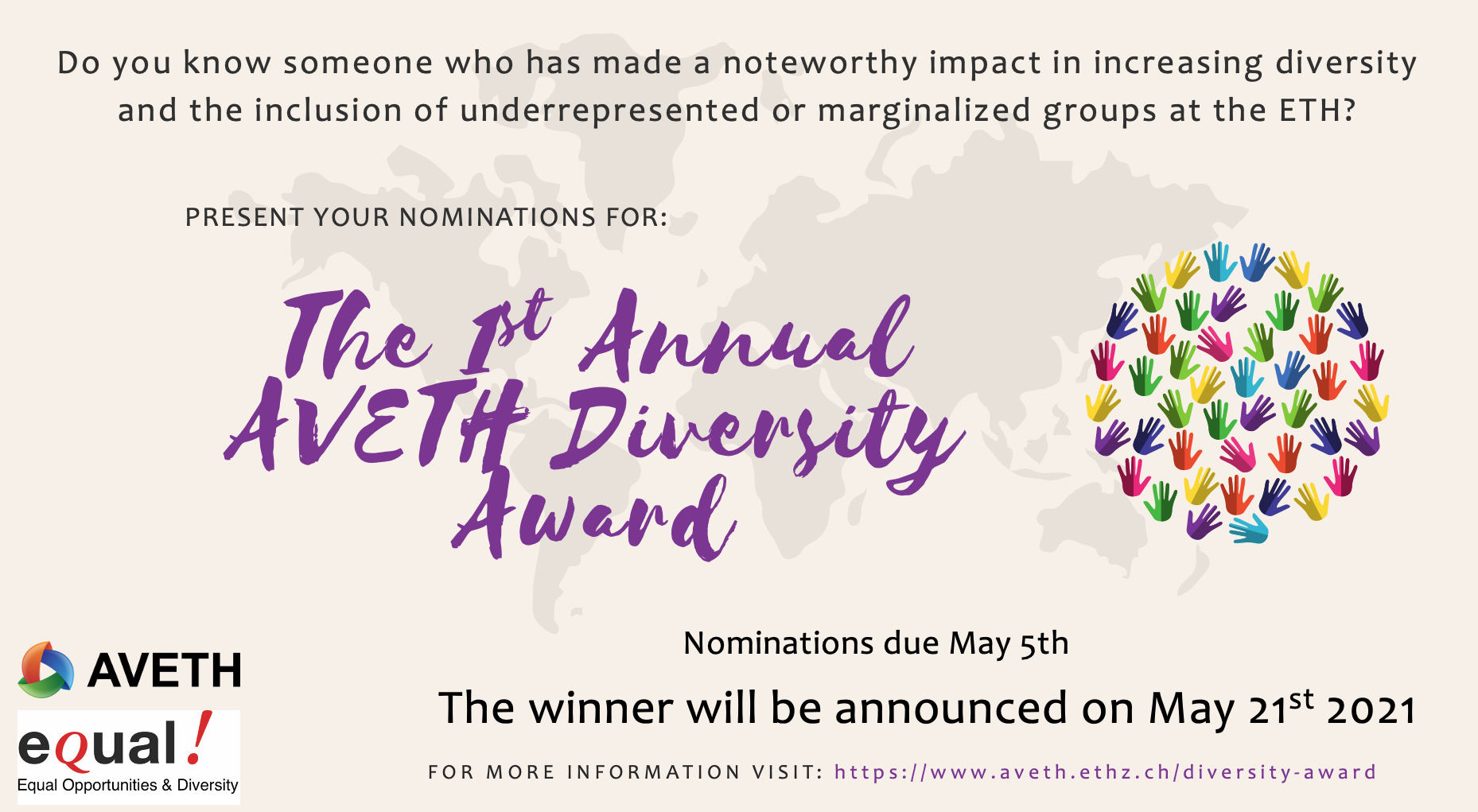 The Annual AVETH Diversity Award honors an ETH scientific staff member who has contributed significantly to the advocation for diversity at ETH Zürich and beyond. The recipient is chosen from nominations submitted by the ETH Zürich community.

Nominees for this award are expected to have made noteworthy impact in increasing diversity and the inclusion of underrepresented or marginalized groups within ETH. A nominee can either be a person (linked to an organisation or not), or an organisation.

The award includes a spot-light on the ETH diversity webpage and a cash prize of 1000 CHF. The prize will be awarded to an individual or organisation with the goal of amplifying ongoing efforts to promote diversity and inclusion.

The award will be announced each year on 21st of May in recognition of World Day for Cultural Diversity for Dialogue and Development.

The 1st Annual Diversity Award was organized by the Association of Scientific Staff at ETH (AVETH) and co-sponsored by the Office of Equal Opportunities. This award represents an actionable plan to give visibility to social justice leaders within our community who serve as role models and are voluntarily committing their time and energy towards outreach activities that raise awareness for tackling discrimination. We received over 80 nominations for members within our ETH community.

The jury was composed of three members of the diversity group at AVETH and one member from Equal. For judging, we could categorize the nominations into 4 main categories: first, people who have integrated diversity & inclusion aspects into their work at ETH but always as part of their job, for example, a Professor being open to discussing the importance of diversity within their group. Second, there were individuals who voluntarily and outside of their actual job, started initiatives that deal with diversity & inclusion and draw attention to these topics. Third, there were individuals who represent or who are very active in organizations or associations. The last group includes associations, organizations and groups that advocate diversity and togetherness, as well as the visibility of minorities.

In seeing these categories, the jury decided to split the award into two categories: an award for an organization that elevates underrepresented groups within our ETH community, and for an individual who is voluntarily outside of their daily job, is actively pushing for diversity initiatives. We judged primarily based on the quality of the nominations we received and the stories they told to be as objective as possible. Since the goal of this award was to give visibility to individuals and organizations pushing for change within our community, we also decided on second and third place finalists in each category.

1st place: The African Students Association of Zurich (ASAZ) was founded in 2015. ASAZ is committed to represent and further the interests of African students in higher education institutions in Zurich. The association not only aims to facilitate their integration into the student life in Switzerland, but it is also a platform where people interested in the African culture and heritage can experience its diversity. ASAZ strives to create more opportunities for African students in Zurich and at ETH as well as to implement projects between Switzerland and Africa.

2nd place: The Parity Group, a fluid group of students, assistants, and professors from the Department of Architecture at ETH Zurich.

3rd place: Combined nomination for groups that empower women in science – LIMES (Ladys in Mechanical and Electrical Studies), WiNS (Society for Women in Natural Science), SWiSH (Society for Wom*n in the Social Sciences and Humanities of ETH Zurich), TWIST, (Towards more Women In Science and Technology), and Phimale.

1st place: Chiara Decaroli is a PhD student in the field of experimental quantum physics at ETH Zurich. During her time at ETH, she has engaged herself in several activities aimed at creating a supportive and encouraging environment for women in science. She has striven to make women in science feel less alone. Her activities to promote gender diversity and inclusion range from getting bins installed in mixed gender toilets in her building, to founding a group called “Honggerberg Ladies Lunches”, aimed at female PhD students at the Honggerberg campus who could meet informally for lunch once a month. She has organised and led events for the awardees of the INSPIRE QSIT award, and more recently has worked on the NCCR Women Campaign, a campaign across all of the swiss NCCRs which highlights swiss female researchers with the objective to inspire young girls to study STEM subjects.

2nd place: Jane Walden works as a Scientific Assistant in the Glaciology Division of the Laboratory of Hydraulics, Hydrology and Glaciology. Jane decided to start regular meetings within their research group on the topics of diversity, inclusivity, and equality. These meetings became known as the “Lunchtime Discussions” and some examples of topics include awareness about implicit bias, representation of minorities in geosciences, and mental health challenges in academia.

3rd place: Darcy Molnar has been working at ETH since 2005, when she joined the Institute of Environmental Engineering as a SNF Marie Heim-​Vögtlin recipient. Since 2017, Darcy has been coordinating the swissuniversities project Science Action in Schools for Sustainable Development (SAS4SD) with activities in Ghana and Cameroon, and since 2019 she has been on the coordination team of the swissuniversities project Network for Water and Life (NEWAL) with activities in West Africa. She is also committed to promoting gender equality in the sciences, and in 2018 established a 500 Women Scientists chapter in Zurich.

The success and excellence that ETH stands upon is built on the wide array of talent coming from a multitude of backgrounds, and it is important to continue to promote this inclusion at every level of the institution. We should constantly be striving to learn from others who are different from us, and to elevate those who may need an extra push due to different circumstances. We truly believe that these core values such as diversity combined with excellence, will shape our institution and community to be the best societal role model for the future generations.